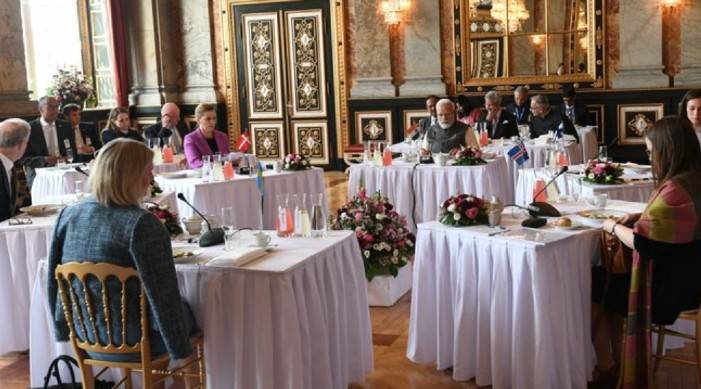 The 2nd India-Nordic Summit, held in Copenhagen, Denmark on Wednesday, reaffirmed the importance of free trade as a driver for achieving inclusive growth.

During the Summit, the Prime Ministers pledged to continue to deepen cooperation between the Nordic countries and India.

Prime Minister Modi invited the sovereign wealth funds of the Nordic countries to invest in India, the Ministry of External Affairs (MEA) said.

According to a Joint Statement issued after the Summit, the Prime Ministers agreed that a strong partnership between India and Nordic countries can help promote innovation, economic growth, climate-friendly solutions and mutually beneficial trade and investments.

“As leading ocean nations, India and the Nordic countries agreed on the benefits of partnering on transforming the shipping industry towards a low carbon future through exchange of good practices and technology transfers” the Joint Statement pointed out.

The leaders discussed the potential of stimulating business cooperation and investments in sustainable ocean industries in India and the Nordic countries, including in the maritime, marine, and offshore wind sectors.

The Summit welcomed the Indian Government’s commitment to innovation and digital initiatives.

The Summit noted that technology can contribute to better and more meaningful lives and assist in solving shared global challenges. The leaders noted that Digital India is an example of government services made more easily available to citizens electronically, the Joint Statement said.

The Summit emphasized the importance of strong people-to-people contacts through education, culture, labour mobility and tourism – all areas where the cooperation between India and the Nordic countries are expanding, the Joint Statement added.

The Summit provided an opportunity to review the progress of the India-Nordic relations since the 1st India-Nordic Summit, which was held in 2018 in Stockholm, the MEA said.

Discussions were also held on cooperation in the maritime sector with a focus on sustainable ocean management. Prime Minister invited Nordic companies for investing in the Blue Economy sector, especially in India’s Sagarmala project, the MEA added.

India’s partnership with the Nordic region in the Arctic Region was discussed. Prime Minister noted that India’s Arctic Policy provides a good framework for expansion of India-Nordic cooperation in the Arctic region.

According to the Joint Statement, the Nordic Prime Ministers reiterated their strong condemnation of the unlawful and unprovoked aggression against Ukraine by Russian Forces.

The Prime Ministers expressed their serious concern about the ongoing humanitarian crisis in Ukraine. They unequivocally condemned civilian deaths in Ukraine. They reiterated the need for an immediate cessation of hostilities.

“They emphasized that the contemporary global order has been built on the UN Charter, international law and respect for sovereignty and the territorial integrity of states. They discussed the destabilizing effect of the conflict in Ukraine and its broader regional and global implications. Both sides agreed to remain closely engaged on the issue,” the Joint Statement added.

On the sidelines of the 2nd Nordic Summit, Prime Minister Modi also held separate bilateral meetings with the Prime Ministers of Iceland, Norway, Sweden and Finland.

He had held a one-to-one meeting and delegation level talks with Danish Prime Minister Mette Frederiksen on Tuesday.