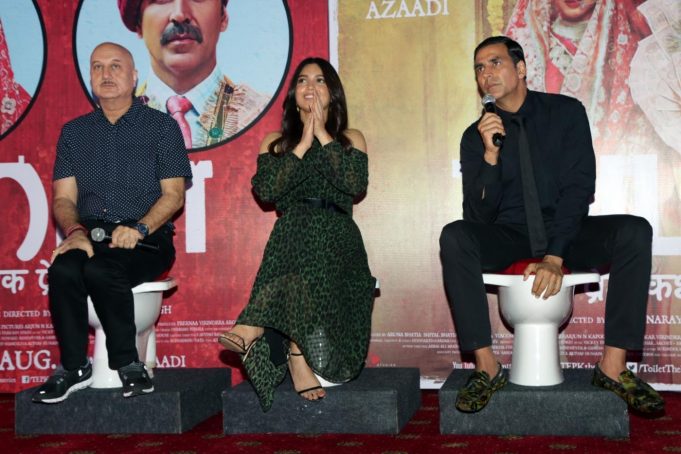 It lacks the usual commercial trappings of a Bollywood film, but with its message of cleanliness and an admonition against open defecation, “Toilet – Ek Prem Katha”, inspired by Prime Minister Narendra Modis Swachh Bharat Abhiyan, has ably demonstrated how a film can transcend demographic and language barriers…reports Asian Lite News

“It is a matter of great pride for us to be associated with ‘Toilet – Ek Prem Katha’. We hope the film continues to contribute to the incredible Swach Bharat Abhiyan initiative,” Shibasish Sarkar, Chief Operating Officer of Reliance Entertainment, told IANS.

Before the movie released worldwide on August 11, 2017, Akshay had the opportunity to thank Prime Minister Modi in person last year, thereby amplifying the intent of spreading awareness about the cause the film addressed.

A movie told through the story of a woman fighting for her hygiene rights, Akshay Kumar and Bhumi Pednekar starrer “Toilet – Ek Prem Katha” is produced by Neeraj Pandey and directed by Shree Narayan Singh, who delivered a strong message with a subtle punch.

The movie minted a net box office collection of Rs 130 crore-plus from the domestic market alone, giving Akshay one of the most commercial films of his career in India as well as in the overseas markets.

Besides the conventional North America, UK and UAE markets, the film also tapped into relatively newer markets like Chile in South America, and all the way to Greece, Czech Republic, Hungary, Malta, Croatia, Estonia, Latvia in Europe, a first for a Bollywood film.

The film released in 22 countries in Europe alone and over 50 countries worlwide, garnering a welcoming response not only from the Indian diaspora but audiences internationally. Countries such as Japan and Malta also held multiple screenings of the film.

In fact, Microsoft Corporation co-founder Bill Gates had lauded the effort and mentioned the movie in a tweet, pointing out how “a Bollywood romance about a newly-wed couple educated audiences about India’s sanitation challenge”.

“Toilet – Ek Prem Katha” released in mainland China in Mandarin as “Toilet Hero” earlier this month in over 12,000 screens. The film debuted at the top spot in its opening week at the Chinese box office, and since June 8, it has already crossed over Rs 100 crore in the Chinese market alone.

“The film is expected to run for another few weeks in China and we are on track to gross nearly as much there as we did in India,” Sarkar said.

The film’s success beyond the Indian borders, he felt, typified how the subject of women’s empowerment is universal and relevant across national and cultural boundaries.

Now, the film is exploring newer markets and opportunities in Hong Kong and other South East Asian countries, according to Sarkar.

Ridhi Dogra was waiting for a big project