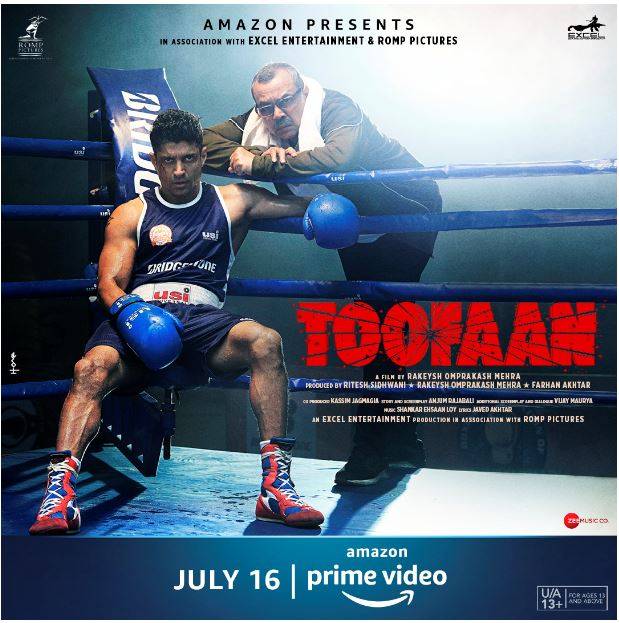 Farhan Akhtar is playing the renowned Olympics runner’s role in the film Toofan. Ace Bollywood composers Shankar-Ehsaan-Loy are back with “Toofaan”, and the trio that has been together since 1997 recently saw the release of the title song of the Farhan Akhtar-starrer boxing drama.

“The title song ‘Toofaan’ has really picked up. For us, it’s been a musical release after one year. Our fans were looking forward to it,” Ehsaan Noorani told.

The film is produced by Farhan Akhtar’s production house Excel Entertainments and directed by Rakeysh Omprakash Mehra. Farhan plays the lead role in the film opposite Mrunal Thakur. After “Bhaag Milkha Bhaag”, “Toofaan” happens is the second sports film of Farhan and Rakeysh with the trio.

The trio has composed six tracks in the film: “Toofaan” (title track), “Star hai tu”, “Purvaiya”, “Ananya”, “Dekh toofaan aaya hai” and “Ganpati Vandana”. The lyrics of the songs are by Javed Akhtar.

“‘Toofaan’ is a sports film and the boxing element is the background, but it’s also an emotional and beautiful love story. We tried to capture the human essence in the song called ‘Toofaan’ written by Javed saab. People who are hearing it seem to like it very much. They are all getting inspired. It’s really affecting them emotionally which is a good feeling,” said Shankar who has sung the song “Purvaiya” while Arijit Singh has sung “Ananya”.

He added: “The songs of ‘Toofaan’ are almost like an emotional roller coaster. ‘Purvaiya’ is a very pure rock qawwali that talks about different aspects of life. ‘Ananya’ is a beautiful romantic song with an acoustic guitar. Farhan sings this song for Mrunal Thakur’s character Ananya in the film. ‘Star hai tu’ is about a small celebration happening in the bylanes of Dongri. ‘Dekh toofaan aaya’ is a funky culmination rap song. The whole album ends with the ‘Ganpati Vandana’.”

The trio has had a long relationship with director Rakeysh Om Prakash Mehra. They have been working with the director since his advertisement days. They then went on to compose music for “Bhaag Milkha Bhaag”.

“Rakeysh is pure love. It’s a delight to just be with him in the studio. He is a man of total ease and no stress. He gives freedom to create whatever you want. He has tremendous respect from the director to the music composer. He understands that we all are musicians who have got depth and aesthetics and he respects that,” concluded Shankar.

Exploring the complexity of human psyche

‘OTT is a reflection of time, not a fixed future’