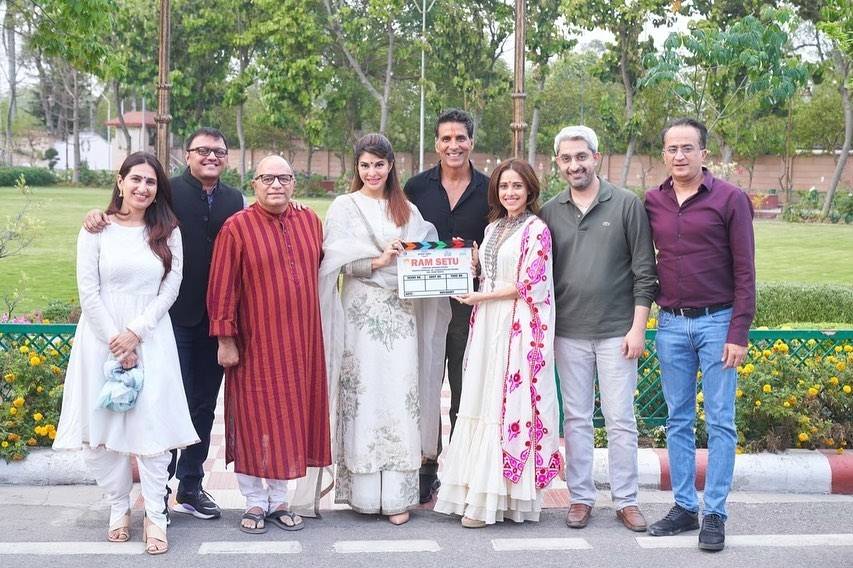 Ram Setu will be directed by Abhishek Sharma and is produced by Aruna Bhatia and Vikram Malhotra.

One of the most awaiting movies of Bollywood, ‘Ram Setu’ shoot started in Ayodhya. Actress Jacqueline Fernandez posted a picture on Instagram with “Ram Setu” co-stars Akshay Kumar and Nushratt Bharuccha on Friday, announcing the start of the ambitious film.

“Here we go!!! #ramsetu feeling so grateful and blessed to be a part of this film!!!” Jacqueline wrote as caption.

The actors started off with the Mahurat shot of the Abhishek Sharma directorial on Thursday.

Besides “Ram Setu”, Jacqueline will also be seen in “Bachchan Pandey”, “Bhoot Police”, “Kick 2”, “Cirkus”, and “Attack” in the coming months.

Actor Akshay Kumar, along with his co-actors Jacqueline Fernandez and Nushrrat Bharucha, reached Ayodhya on Thursday for the mahurat of their new film ‘Ram Setu’.

The actors will proceed to the Ram Janmabhoomi temple later in the afternoon where they will perform ‘puja’ and formally start the shooting of ‘Ram Setu’.

In the evening, the actors will return to Lucknow where they are expected to meet Chief Minister Yogi Adityanath.

Ram Setu will be directed by Abhishek Sharma and is produced by Aruna Bhatia and Vikram Malhotra.

The film will be shot at multiple locations with a major part in Mumbai.

Before leaving for Ayodhya, Akshay shared a photo of himself, Jacqueline Fernandez and Nushrratt Bharuccha having a candid chat outside what appears to be a chartered flight on Thursday morning.

Akshay Kumar wrote: “A special film, a special start…Team #RamSetu off to Ayodhya for the mahurat shot. And so the journey begins. Need special wishes from all you guys.”

Read More-AKSHAY KUMAR: ‘If I like a film, I do it’