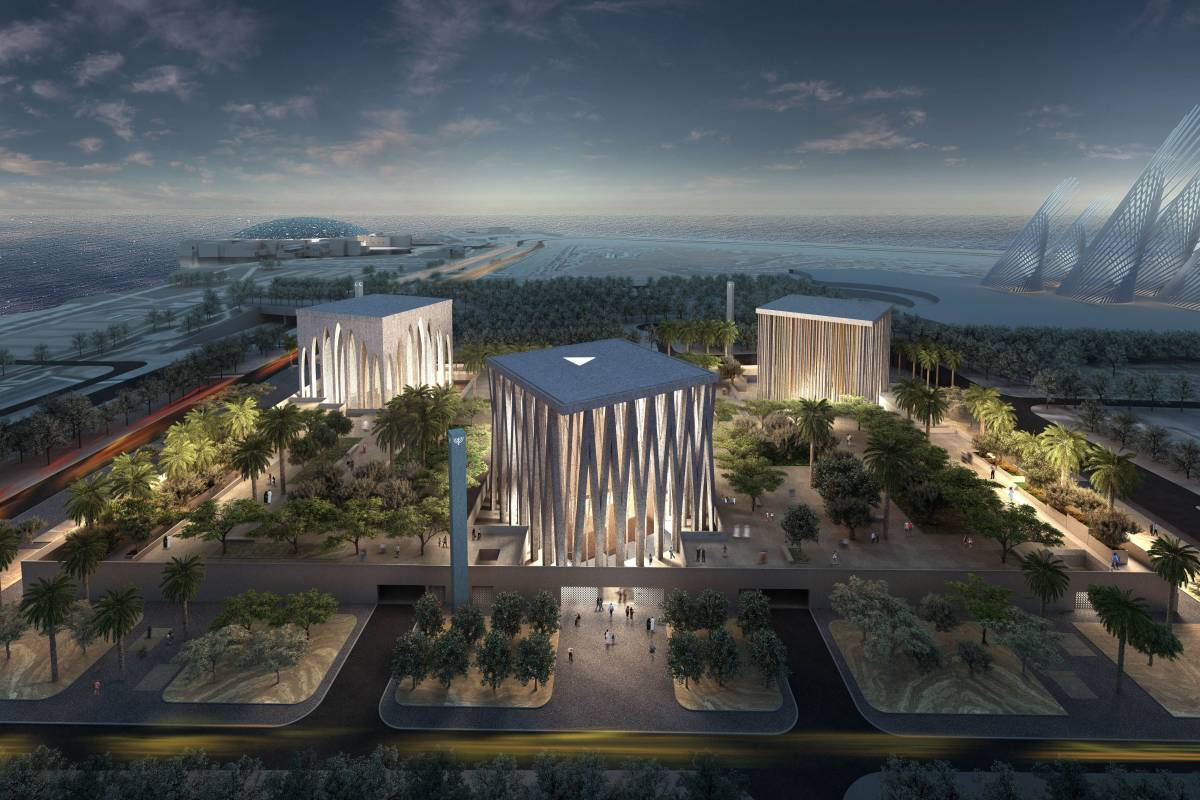 Opening in 2022, the Abrahamic Family House marks 20 percent completion of its development. The project inspired by the Document on Human Fraternity and constructed on Saadiyat Island in Abu Dhabi, the capital of the UAE, is endorsed and closely followed by the Grand Imam and Pope Francis.

The project is supervised by the Higher Committee of Human Fraternity.

The Abrahamic Family House’s design, by architect Sir David Adjaye, captures the values shared between Judaism, Christianity, and Islam, through three main buildings, including a mosque, a church, and a synagogue in one place. As such, the complex innovatively recounts the history and builds bridges between human civilisations and heavenly messages.

The names of three iconic houses of worship are officially unveiled as “Imam Al-Tayeb Mosque,” “St. Francis Church,” and “Moses Ben Maimon Synagogue”. In the vicinity of the site, there will be a cultural centre that aims to encourage people to exemplify human fraternity and solidarity within a community that cherishes the values of mutual respect and peaceful coexistence, while the unique character of each faith is preserved.

The design of the project was first unveiled by H.H. Sheikh Abdullah bin Zayed Al Nahyan, Minister of Foreign Affairs and International Cooperation, at a global gathering in New York in 2019, during the 2nd meeting of the Higher Committee of Human Fraternity (HCHF). The design was presented to Pope Francis and the Grand Imam during a meeting in November 2019.

“The Abrahamic Family House epitomises interfaith harmonious coexistence and preserves the unique character of each religion. It personifies Abu Dhabi’s vision for human fraternity and embeds coexistence into the already diverse cultural fabric of the UAE. Overseeing the development of this iconic project is inspiring and reflective of the UAE efforts in realising the values of the Document on Human Fraternity and fostering its lofty principles. The naming of the three houses of worship recognises the work of His Eminence Grand Imam Al Tayeb, His Holiness Pope Francis, and Moses Ben Maimon, and harnesses their teachings to forge a message of goodwill for future generations around the world,” said Mohamed Khalifa Al Mubarak, Chairman of the Department of Culture Abu Dhabi and a member of the Higher Committee of Human Fraternity.

As a place for learning, dialogue and worship, the Abrahamic Family House will be a cultural landmark and an inspiring global symbol that epitomises the shared values of harmonious coexistence and understanding among the three Abrahamic faiths of Judaism, Christianity, and Islam. Twenty percent (20 %) of the project is now complete, and it is due to open in 2022.

During the design phases of the houses of worship, members of religious communities worldwide have been engaged and consulted to ensure consistency with and adherence to the respective religion’s requirements and teachings. Once complete, the final design of the three buildings will ensure there are enough spaces that offer their visitors real peace of mind and soul within an atmosphere in which a spirit of intimacy prevails.

Each aspect of the design is brought to life through the architectural features and unique constructional details of the facades, the external and internal views, the columns, and the windows and vaults that reflect the unique characteristics of each of the three Abrahamic faiths.

On February 4, 2019, His Eminence Grand Imam of Al-Azhar and His Holiness Pope of the Catholic Church signed the ‘Document on Human Fraternity for World Peace and Living Together’ during their historic meeting in Abu Dhabi. In this spirit, the three places of worship that make up the Abrahamic Family House will welcome visitors from all over the world to worship, learn and engage in dialogue. In addition, the complex will offer a variety of daily programs and activities and will host international conferences and world summits that promote harmonious coexistence within communities.