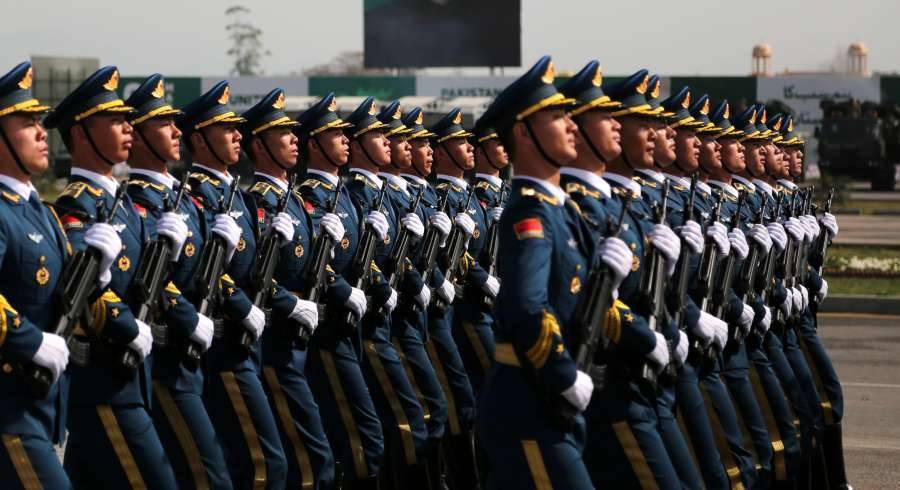 Interestingly, this was the third three-star ceremony in less than nine months…reports Asian Lite News

Border tensions with India, as well as the recent American and allied pullout from Afghanistan, means the importance of the Western Theater Command of the People’s Liberation Army (PLA) has been growing in China’s strategic reckoning.

This was confirmed on September 6 when Chairman Xi Jinping in Beijing presided over a ceremony promoting five senior officers. The five lieutenant generals (two from the army, one from the navy and two from the air force) were promoted to general, the PLA’s highest rank. These generals and admiral have been given command of the PLA Navy (PLAN), PLA Air Force (PLAAF), National Defense University and two of five theater commands.

Interestingly, this was the third three-star ceremony in less than nine months. Four figures were promoted on December 18, 2020 and another four on July 5, 2021. Traditionally, such promotion ceremonies occurred only annually in July.

One of these promotions saw an army general heading the Central Theater Command, replacing a PLAAF general. This means all five theater commands now have an army general in charge. For all the talk of joint warfare and the PLA becoming less ground-centric, it seems that “Big Army” thinking still dominates within the PLA. This could be seen as a retrograde step, even if the current situation is changed in the future.

In a report for the China Aerospace Studies Institute (CASI), Kenneth W Allen, Dennis J Blasko and John F Corbett observed: “The recent promotions may reflect aspects of the announced goal to change the PLA’s hierarchical structure from a ‘grade-based’ to a ‘rank-based’ system.”

The Chinese military has a rather convoluted system of ten officer ranks (second lieutenant to general/admiral) and 15 grades (platoon leader to vice chairman of the Central Military Commission [CMC]). Establishing a “rank-based” system will require shortened times between promotions. More frequent three-star promotion ceremonies could be evidence that this is happening.

One of the newly minted generals was Wang Haijiang, Commander of the Western Theater Command. Allen, Blasko and Corbett, observed: “The assignment of the third new commander to the Western Theater Command in less than two years [is] an unexplained phenomenon during the period in which China and India have been engaged in a tense and deadly border confrontation in Aksai Chin.”

Of the PLA’s 37 full generals/admirals, at least nine will reach retirement age of 65 before the 20th Party Congress in 2022. Thus, new members of the CMC will eventuate at that time. The CASI report noted, “2022 is likely to be turbulent as roughly two dozen theater command leader-grade generals and admirals vie for promotion to these most senior leadership positions. It is unclear how the recent three-star promotions fit into that puzzle.”

China’s strategy in the Himalayas is not that different from the South China Sea, where it attempts to achieve a fait accompli on the ground, often using “gray zone” tactics. For example, unidentified Chinese personnel in civilian clothing have come from PLA positions in Demchok to pressure Indian herders to vacate the area. By lodging forces quickly in disputed areas, the PLA could attempt to leave India few opportunities to reverse them.

With a dramatic turnover in the Western Theater Command, perhaps Xi and the CMC are agitating for more decisive results along the Indian border. Future forays across the LAC may yet occur. (ANI)