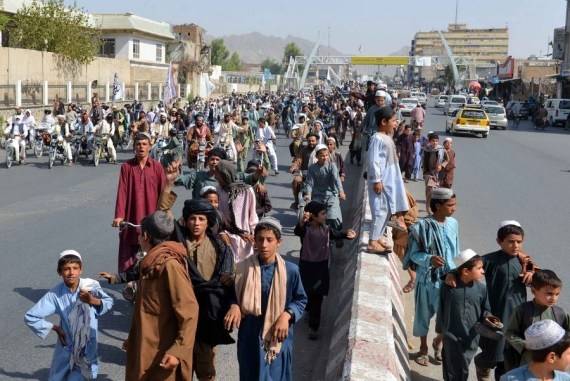 Job losses, lack of cash and soaring prices are creating a new class of hungry in Afghanistan, the United Nations World Food Programme (WFP) has warned on Thursday.

In a statement, WFP said that urban residents are suffering from food insecurity at similar rates to rural communities, which have been ravaged by drought twice in the past three years.

According to surveys conducted by WFP, only five per cent of households in Afghanistan have enough to eat every day while half reported they had run out of food altogether at least once in the past two weeks.

Mary-Ellen McGroarty, WFP’s Country Director and Representative said that the economic freefall in Afghanistan has been abrupt and unrelenting as the country grapples with a second severe drought in three years. “We are doing everything we can to support Afghan communities at this critical time.”

The middle classes are also struggling – only 10 per cent of households headed by someone with a secondary or university education were able to buy sufficient food for their families every day, the WFP said.

Though the situation is worse for those less well-educated, the unprecedented prevalence of hunger among families that had previously been spared the scourge of hunger signals the depth of the crisis facing Afghans.

“WFP is stepping up to the urgent challenge which is now two-fold. First, we continue to assist the people who need it most to avoid acute hunger and malnutrition from devastating the country, and second, we are strengthening local capacity to produce food and get it to market, while also providing short-term work opportunities that help stabilise the economy and give families access to cash,” McGroarty added.

On Wednesday, WHO Director-General Tedros Adhanom Ghebreyesus warned that Afghanistan’s healthcare system is on the brink of collapse.

He made the remark after completing a high-level mission to Kabul where we met with senior members of the Taliban leadership, UN partners, health care workers and patients, and WHO staff.

This came as the UN’s top humanitarian official, Martin Griffiths, announced the release of USD 45 million from an emergency fund to support the healthcare system in the troubled country. (ANI)