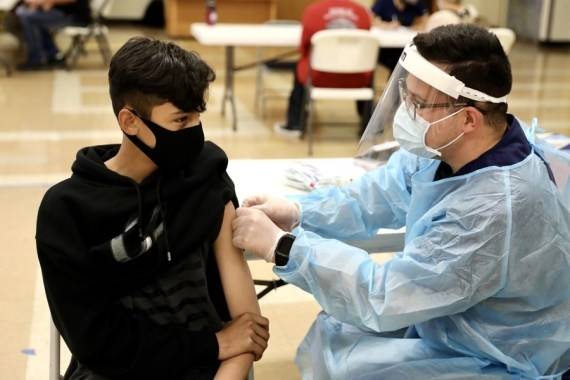 The people eligible for a booster would be those who received their second dose six or eight months earlier….reports Asian Lite News

Health officials have voiced their support for the recommendation from the Food and Drug Administration (FDA) advisory panel that Covid-19 booster shots be limited to those 65 years and older and individuals at high risk, with some hoping for a broader use of the jabs at a later date.

National Institutes of Health Director Francis Collins told Fox News on Sunday that the guidance issued two days ago by the FDA panel is in line with what the US administration planned for a booster rollout, though not identical.

“I think there’s less difference between where we were in the middle of August and what the advisory committee said this past Friday,” he said.

The administration announced in August that a rollout plan was being put in place for booster shots that would be initiated September 20, but also specified that the plan itself was pending recommendations from the FDA.

The people eligible for a booster would be those who received their second dose six or eight months earlier.

Anthony Fauci, director of the National Institute of Allergy and Infectious Diseases, told NBC News on Sunday that the plan initially announced by the White House is in line with the advisory panel’s recommendation.

Ultimately, he thought the “proper regimen” will include the original two shots plus a booster for everyone, though it may not be necessary right now.

“You want to do that according to what the data tells you, including the risk-benefit ratio, particularly for the younger people who do not generally get as much severe disease as the elderly and others,” Fauci said.

“So, I believe that there’s a good chance that as we get into the coming months, into the next year, that you will see the data pointing to the benefit of having a much broader blanket of people.”

A decision about boosters from the FDA is expected by this week, and an advisory committee of the Centers for Disease Control and Prevention (CDC) is slated to meet on Wednesday and Thursday to recommend how a third shot should be used.

The FDA advisory committee, following Pfizer’s lead, recommended that the third shot be given at least six months after the second.