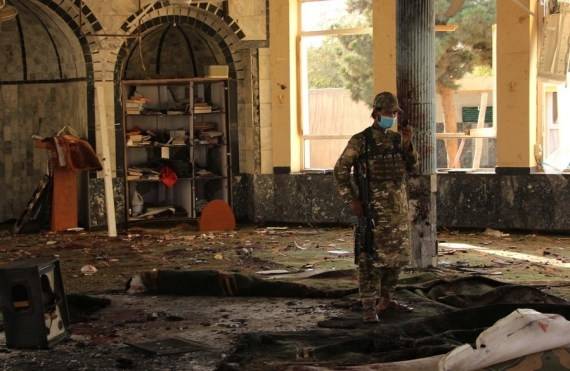 The victims of a suicide bombing at a mosque in Afghanistan’s Kunduz province were buried in groups, a media report said citing officials.

While authorities in Kunduz have put the death toll of Friday’s deadly bombing, claimed by the Islamic State (IS) terror group, at 46 with 143 others injured, members of the Shia Ulema said nearly 120 worshippers were killed and 160 wounded, TOLO News reported.

“As per our information about the bodies brought to cemeteries, around 120 people were martyred and around 160 others were injured,” the report quoted Imam Razavi, a Kunduz-based religious scholar, as saying.

The mass burial took place on Saturday in Kunduz city.

The deadly blast the Shia mosque has received widespread condemnation.

UN Secretary-General Antonio Guterres strongly condemned the “horrific” attack, saying: “Attacks that deliberately target civilians exercising the right to freely practice their religion are violations of fundamental human rights and international humanitarian law… The perpetrators must be brought to justice.”

In a statement the European Union said that “the perpetrators of this despicable crime, for which the terrorist group ‘IS-Khorasan’ claimed responsibility, must be brought to justice.

“The human rights of all Afghans, including the right to life and the rights of ethnic and religious minorities, have to be protected and respected.”

The statement termed the continued “terrorist attacks” as a serious obstacle to a stable and peaceful Afghanistan.

The US Department of State said that Afghans deserve a “future free of terror”.

The Afghanistan Independent Human Rights Commission (AIHRC) called the attack against human rights values, saying it was a continued sting of deliberately targeting the country’s Hazara and Shia community.

Chairman of the high council for national reconciliation, Abdullah Abdullah and former president Hamid Karzai also condemned the attack and expressed their condolences to the victims’ families.