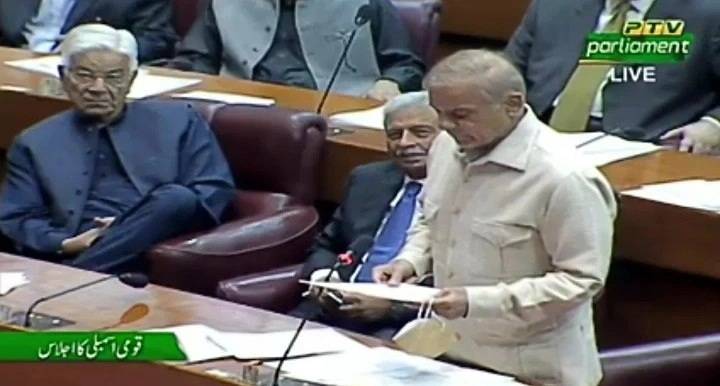 The opposition is gearing up for protests both inside and outside the House in case Imran Khan’s fate is not decided on March 31, reports Atul Aneja

The countdown to the exit of Imran Khan may have begun in earnest after the opposition in Pakistan tabled a no-confidence motion against the Prime Minister.

The no-confidence resolution in the Pakistan’s National Assembly was tabled on Monday by Shehbaz Sharif, the Leader of the Opposition.

The motion was tabled after a two-day recess and was presided over by the Deputy Speaker of the National Assembly Qasim Khan Suri.

“I will request that you (Suri) give permission to present this item in the house … as the resolution was already on the agenda,” Sharif said addressing the chair.

This was followed by voting to ascertain if the resolution that was tabled was backed by the mandatory numbers. NA rules allow tabling of a non-confidence motion only if there is an endorsement of the move by at least 20 percent of the members of the NA. That translates into 68 votes in favour of the no confidence motion.

Khan’s fate could be decided on March 31 when members vote. However, interior minister Sheikh Rashid had earlier said that voting could take place on April 4, giving the ruling party more time to garner numbers to defeat the no-confidence motion. The opposition is gearing up for protests both inside and outside the House in case Khan’s fate is not decided on March 31.

Already Islamabad is abuzz with frenetic political activity with street protests escalating with the arrival of the Long March led by Maryam Nawaz, former Prime Minister Nawaz Sharif’s daughter, and Jamiat Ulema-e-Islam (JUI) President Fazal-ur-Rehman arriving in Islamabad today. The protesters are raising their voice against the rising inflation under the Pakistan Tehreek-e-Insaaf (PTI) regime.

In case the no-confidence motion does not go by the anticipated script, there is enough firepower in the crowds to ignite a major conflagration.

The opposition needs muster the magic number of 172 lawmakers to oust Khan.

After the decision of Shahzain Bugti of the Jamhoori Watan Party to step out of the ruling coalition on Sunday, treasury members have been slashed to 178 in the 342-member lower house of the parliament. With that the opposition has 163 in the bag, only 9 shorts of the required numbers.

The PML-Q, the Balochistan Awami Party and the Muttahida Qaumi Movement-Pakistan — three major government allies have the collective support of 17 MNAs. These fence sitters are yet to decide which way they will vote.

Amid the fluid situation, over a dozen dissidents from the ruling PTI have openly slammed government policies, though this does not necessarily mean that they will cast their votes against the Prime Minister. Horse trading is expected to gallop big time till the time the voting takes place.

Khan has few options to exercise. Now that the no-confidence motion has been tabled the Prime Minister cannot recommend the dissolution of the House and call for fresh elections, under Pakistan’s basic law.

In case he loses the trust vote, Shebaz Sharif, the leader of the opposition PML-N will form the new government.

Political tensions in Islamabad are running high after PM Khan “flag marched” supporters on Sunday in a show of strength . In a defiant speech to delirious crowds, he blamed foreign powers for destabilising his government.