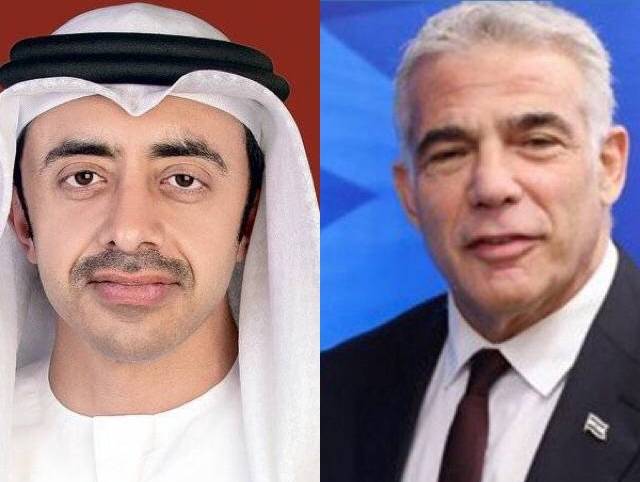 Sheikh Abdullah emphasised the need to respect the legal and historical status quo of Jerusalem and to respect the Hashemite Kingdom of Jordan’s guardianship over its holy places under international law, reports Asian Lite Newsdesk

The UAE on Thursday emphasised the significance of calming the situation and ceasing any practices that violate the sanctity of the blessed Al-Aqsa Mosque.

They also discussed the situation in the region and the latest regional and international developments of mutual concern.

Sheikh Abdullah emphasised the need to respect the legal and historical status quo of Jerusalem and to respect the Hashemite Kingdom of Jordan’s guardianship over its holy places under international law.

Sheikh Abdullah has welcomed the Israeli government’s decision to halt the ‘Israeli Flags March’ from reaching the Bab al-Amud area, as well as to prevent non-Muslim visitors from entering the Al-Aqsa courtyards from Friday until the end of the Holy Month of Ramadan.

”Our region needs stability and to work together in order to move forward in development along all paths so as to achieve the aspirations of our peoples for progress and prosperity,” Sheikh Abdullah said.

He also congratulated the Israeli Foreign Minister on the occasion of Passover and said that he looks forward to enhancing joint cooperation with the State of Israel in all domains and to work together to boost peace and stability in the region.

Khalifa Shaheen Al Marar, Minister of State, headed the UAE delegation to the fourth meeting of the Arab Ministerial Committee in charge of international action to confront illegal Israeli policies and measures in the city Jerusalem.

The meeting was held at the invitation of the Hashemite Kingdom of Jordan in its capacity as Chair of the Committee, to deliberate ways to confront the continuous Israeli attacks on Al-Aqsa Mosque, and the resultant serious repercussions on the situation in Al-Quds Al-Sharif.

The meeting discussed the dangerous developments taking place at Al-Aqsa Mosque and Al-Quds Al-Sharif, including the existing tensions and the Israeli aggressions and measures.

Featuring high on the meeting’s agenda was taking a joint Arab action to stop the Israeli attacks and violations against the holy sites, ending violence and restoring comprehensive calm, emphasising the need to respect the legal and historical status quo of Al-Aqsa Mosque and Al-Haram Al-Sharif, and exploring ways to revive the peace process in the foreseeable future to achieve the two-state solution.

The meeting issued a statement condemning the Israeli attacks and violations against worshipers at Al-Aqsa Mosque, which escalated perilously over the past days of Ramadan. The statement warned that such Israeli measures threaten to ignite a cycle of violence and pose a menacing threat to security and stability in the region and the world.

The statement rejected all illegal practices aimed at changing the legal and historical status quo of Al-Aqsa Mosque, as well as any attempt to divide the holy site in terms of time and space. It stressed the need for Israel to respect the historical and legal status quo in Al-Haram Al-Sharif and return to what it was before the year 2000 in a way that maintains the fact that Al-Aqsa Mosque is a place of worship for Muslims, and that visits to it for non-Muslims are organised by the Jordanian Ministry of Endowments and Islamic and Sanctuaries Affairs, in its capacity as the legal authority invested with exclusive jurisdiction to manage Al-Haram Al-Sharif’s affairs, including all entry procedures therein.

The statement affirmed support for the Palestinian people and all their legitimate rights, foremost of which is their right to freedom and to an independent and sovereign state according to the June 4, 1967 borders, with East Jerusalem as its capital, on the basis of the two-state solution in accordance with international law, the Arab Peace Initiative and other relevant international references.

The statement also called on the international community, especially the UN Security Council, to take immediate and effective action to stop the illegal Israeli practices in Jerusalem and Al-Haram al-Sharif.

The members of the Arab Ministerial Committee and the Secretary-General of the League of Arab States, in coordination with the Arab countries, discussed making contacts with the international community and international organisations in order to clarify the danger of these practices in Jerusalem, and to push for an effective international position to discourage Israel from these measures and get it to respect international law and restore comprehensive calm.