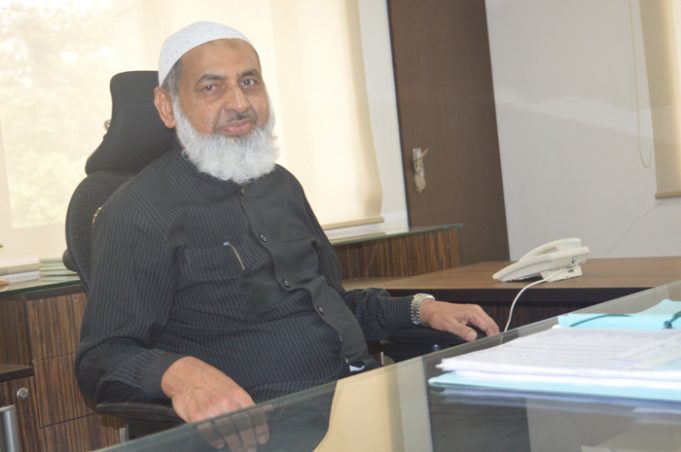 Mr Ibrahim Hajee, Chairman of PACE Group, says India survived many crises in the past and the country will survive current threat to disturb the secular fabric of the country by a section of the society….An Exclusive interview with Kaliph Anaz of Asian Lite

Dr Ibrahim Hajee, Chairman of PACE Group , one of the most respected Indian-origin businessmen in the UAE, says India survived many crises in history and the great country has the potential to tame whatever threats to disturb its secular fabric.

He was commenting on his take on present threat to secularism and diversity in the country by a section of the society.

“The country is composition of so many religious sects, so many languages and so many cultures,” said Dr Ibrahim Hajee. “Recently there has been an attempt to consolidate into one way of thinking, one cultural and traditional setup. I think India should remain a country of diversity, successfully this has been happening for 100s of years. Even after independence for about 70 years or so, India has made very good progress.

In an exclusive interview with Asian Lite, the veteran Indian entrepreneur also commented on Indian economy.

“India can progress in many ways, especially in the economic and social sectors,” said Dr Ibrahim Hajee. “Economically, the country has progressed well and India is one of the most important economic powers of today. With the GDP growth India is having it has the potential to be the third after Russia and China within the next 10 years.”

“Religion tells you what you were, what you are and what you will be in the future,” said Dr Hajee. “So it gives a definite understanding of the insignificance of anything, because the creator is Allah and anything other than him is all created. Prophets are his creation, the world is his creation, our life is timed properly. No scientist is living more than a certain age, no doctor is living, no king is living. That means the creator, the Kahliq, is the controller. Nothing is in our hands, by inventions and discoveries, we make life easy. If you want to travel to Abu Dhabi in 1966 – 67 it was 6 hours journey to Abu Dhabi, then it became 4 hours, now it is almost one and a half to two hours and it will be in hyperloop 12 minutes.

“Also when I’ve travelled to Sydney it took 14 hours straight, this was not possible is the past. So convenience is there today, so man should grow mentally, socially and psychologically and more than everything else the human values needs to be sustained or remained, then only all these progress will be registered.

“Allah has given that information and except human beings everything has a set goal, target and pattern. For example, a mango tree will give mangoes and a banana tree will give bananas. For human beings Allah has given all that means discretion of judgement and discretion of action, it is only for human beings. Religion is not an option like you take food. This world is only for a very short period. I am here for 51 years almost and I don’t know how this has passed, and in another 50 years most of us will not living in this earth. So we are just following the destiny. So if we choose a religious life, our life hereafter will also become successful.

“Respect your parents, elders, teachers and love all creations of Allah will make you a good human being,” said Dr Hajee. “So with this four things you will become a successful person.”

The Sharjah based businessman also commented on the recent visit by Sharjah Ruler His Highness Sheikh Sultan Bin Muhammad Al Qasimi to his home state Kerala.

Dr Ibrahim Hajee said the visit will open a new chapter in Indo-UAE relations. He expressed the hope that such a visit would prompt other leaders to visit the southern state in the near future.

“The visit is very significant because this is for the first time in the history of Gulf countries, a personality of this stature is visiting Kerala,” Mr Ibrahim Hajee told Asian Lite. “His Highness Sheikh Sultan was very warmly welcomed in Kerala. He was very appreciative and he enjoyed his stay to Kerala.

“The visit is also important because HH Sheikh Sultan is one of the seven Supreme Council members of the UAE. The event was well covered and this will prompt others to visit Kerala in the future.”

Dr Ibrahim Hajee, chairman of several educational institutions in the Middle East and in India, praised HH Sheikh Sultan for his commitment to education and his dedication to encourage students to acquire knowledge through research.

“The Sharjah Ruler delivered a very informative speech at Trivandrum Taj Hotel,” said Hajee. “The speech shows the depth of his knowledge on various subjects, especially Arab literature and the extent of Indo-Arab relations.”

In an interactive session following a lecture on ‘Sultan and Archives’, the Sharjah ruler also offered to have tie-ups with universities in Kerala for sharing the rich archives collection of Sharjah.

“Information should be for everyone. One should not be miserly in sharing information. I am ready to share my archives with any university in Kerala,” said Sheikh Sultan.

“The most significant gesture of the Sharjah ruler’s visit is his decision to forgive 149 Indian prisoners, who were in prison for their inability to pay the fines,” said Ibrahim Hajee. “The visit is also very important as hundreds of thousands of NRIs who hail from Kerala are living in the UAE. The Emirate has always had a soft corner for us. With this visit, we were also able to give back some of the warmth and hospitality to the Gulf states.