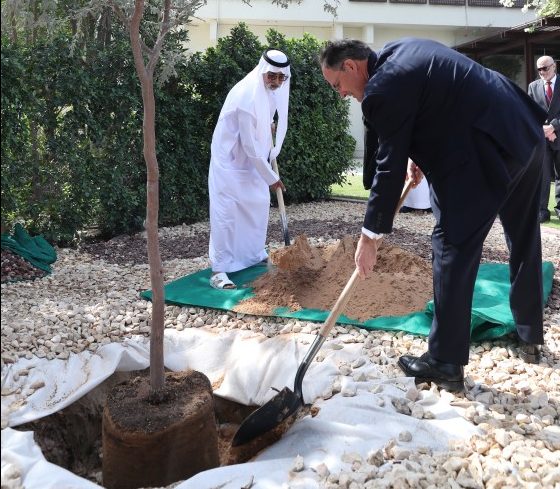 Sheikh Nahyan bin Mubarak Al Nahyan, Minister of Tolerance, together with the British Ambassador to the UAE, planted a tree in the grounds of the British Embassy in Abu Dhabi to commemorate the Year of Zayed.

Planted in the garden of the Ambassador’s Residence, the Ghaf tree, the national tree of the UAE, is a celebration and a reminder of the leading role that the late Sheikh Zayed bin Sultan Al Nahyan played in greening the UAE and seeking environmental sustainability. The Ambassador and Sheikh Nahyan were joined for the event by staff from the Embassy.

The plaque which stands in front of the tree includes a fitting quote from the late Sheikh Zayed, which reads, “They used to say that agriculture has no future [in the UAE], but with God’s blessing and our determination, we have succeeded in transforming this desert into a green land.”

Speaking at the event, Sheikh Nahyan said, “Our country’s national tree sending its roots deep into the garden of the British Embassy in our capital city of Abu Dhabi would have delighted our nation’s late founder, Sheikh Zayed bin Sultan Al Nahyan. No one was more devoted to our environment than Sheikh Zayed.”

British Ambassador to the UAE, Philip Parham said, “The tree, as well as being an emblem of the UAE, is a very appropriate symbol for this celebration. First of all because Sheikh Zayed hugely valued the environment which is a key part of his legacy. Secondly, because it will endure for years and years and send a positive message to our successors and future generations on Sheikh Zayed’s legacy and the enduring relationship between the UK and UAE.”

The Minister of Tolerance added, “The tree shelters a friendship firmly established with the United Kingdom when Sheikh Zayed united our emirates in 1971. Since then, we have dealt with one another on the basis of, to borrow Sheikh Zayed’s words ‘tolerance, compassion, and dialogue.’ We have benefited immensely from the talent, energy, ingenuity, knowledge, and experience that British citizens have brought to the UAE.”