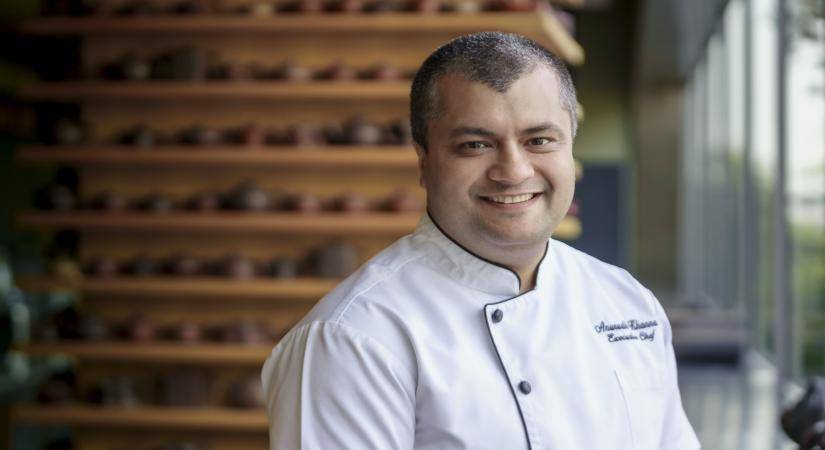 As I travelled I realised that the cuisine is changing. Dishes even ‘sambhar’ and ‘rasam change. Andhra-style ‘sambhar’ is very spicy in some places and a little sweet-ish in others…Chef Khanna speaks with Siddhi Jain.

Food is transcultural that has evolved and changed enough over these years. It is important to respect the sanctity of any cuisine, as it is deeply rooted in culture, says Chef Anurudh Khanna, Multi Property Executive Chef at Westin Gurgaon, New Delhi. Having curated a food festival that brings to town culinary treasures from the Tamil city of Tiruchirapalli, Chef Khanna highlights that there are many misconceptions relating to cuisine from Southern Indian states, which make for a rich culinary bouquet in themselves. Chef Khanna speaks on the side-lines of ‘Treasures of Trichy’ food festival which is going on at Westin Gurgaon, New Delhi till September 15. Excerpts:

Could you tell me about the inspiration behind ‘Treasures of Trichy’?

Khanna: While planning a food festival, we were just thinking which cuisine and Indian state to tap into. We looked at the resources in our culinary team at Westin – here someone is from Uttarakhand, from Nepal, southern states, Rajasthan, Bengal – so it’s quite varied. Our resident South Indian chef, Chef Vijaykumar is from Tiruchirapalli, who is with us from 2019. That’s where we thought of putting this cuisine in the front, and making him the main chef for food festival.

There are many variations in what is singularly thought of as ‘South Indian cuisine’. As a chef, what do you have to say about this?

Khanna: I also discovered this, during my last assignment in Bangalore where I traveled to Mangalore, Kerala, and to Andhra. As I travelled I realised that the cuisine is changing. Dishes even ‘sambhar’ and ‘rasam change. Andhra-style ‘sambhar’ is very spicy in some places and a little sweet-ish in others. Not just the palate changes from state to state, but breakfast ‘sambhar’ is different from all-day ‘sambhar’. The Spice level matters a lot. For example, Kannada cuisine is not that spicy, Mangalore cuisine is rich with spices, Andhra cuisine is heavy on chillies but Kerala cuisine is very fragrant.

Chefs are experimenting with fusion styles, for instance, something like a dosa-flavoured burger. Any opinions?

Khanna: As a chef, I’d say it should not be done. A little twist to the recipe is acceptable but changing the recipe upside-down is not. Food is an element very rooted in culture. You can be just a little bit around culture, adapt but complete 180-degree changes and fusions, are not my food philosophy. Let’s keep the sanctity of the cuisine as it is. It is different from doing multi-grain dosa or ragi dosa, even variations in stuffing is possible.

What’s next, when it comes to food festivals at the Westin?

Khanna: Next would be regional as well. I’d discover some more regional talent from my team first. Maybe I could do a travel flow within Uttar Pradesh, and bring out regional variations among UP dishes.”

This is how Taapsee made herself for ‘Rashmi Rocket’