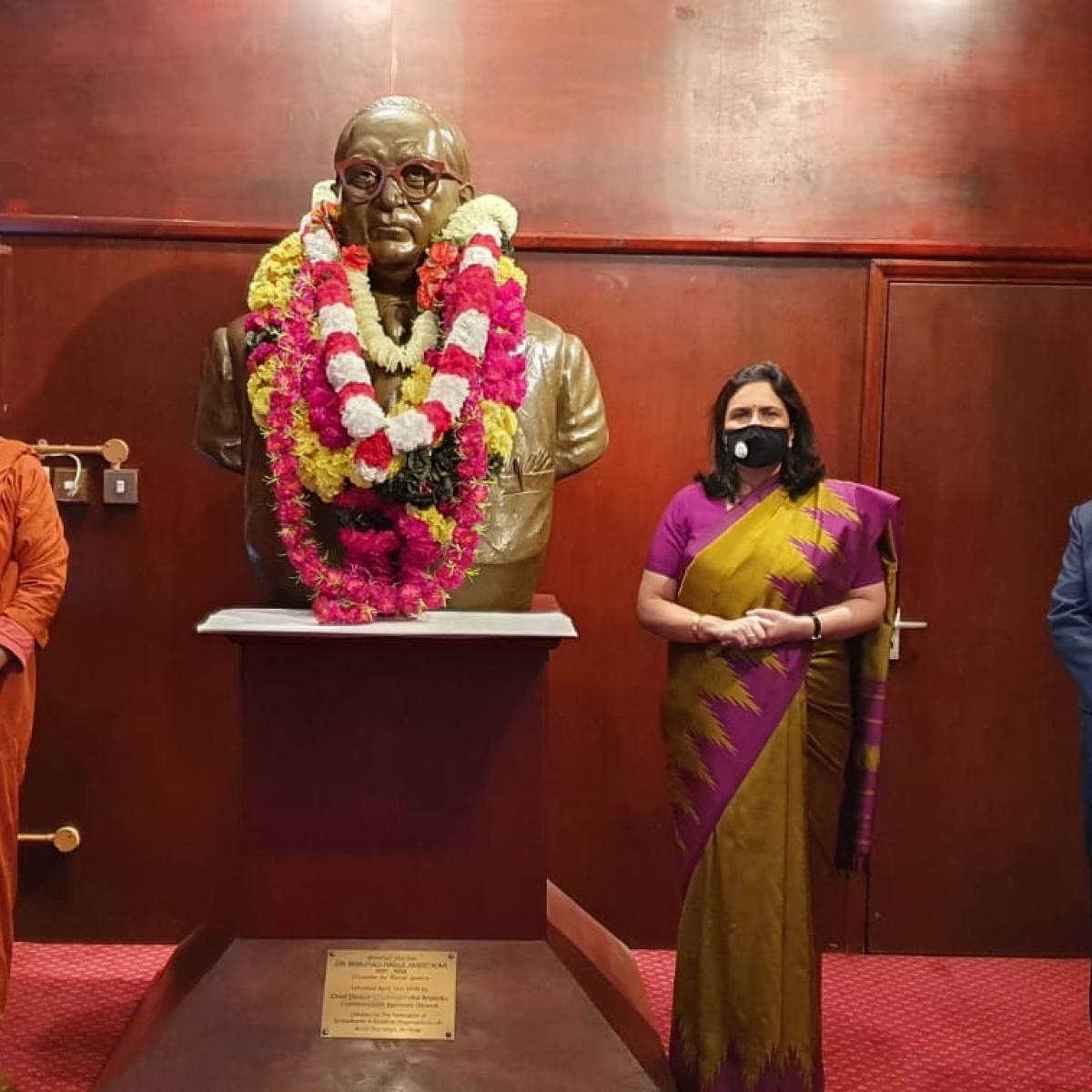 Dr. Ambedkar’s vision was of an India where the social system and economy would promote the full development of human potential and ensure a dignified existence for all citizens … reports Asian Lite Newsdesk

High Commission of India in London paid tribute to Dr Bhimrao Ramji Ambedkar on his 130th birth anniversary at India House. Babasaheb, as he was popularly known, was born on 14th April 1891, He was an academician, a leading figure in the national movement for a free India and a strong voice against untouchability.

Bhimrao was born in the town and military cantonment of Mhow, which is now known as Dr. Ambedkar Nagar. He was the 14th and last child in a family that was considered untouchable at that time.

Growing up with few resources amidst adversity, Bhimrao was an excellent scholar who passed his matriculation exams and proceeded, as the first member of his caste, to attend college at the University of Bombay.

After obtaining a degree in Economics and Political Science, he took up employment in the State of Baroda. Soon the State of Baroda awarded him a three year scholarship for study in the USA, where he passed his MA in June 1915 in Economics, Sociology, History, Philosophy and Anthropology. Ambedkar then presented a thesis on Ancient Indian Commerce. His relentless thirst for knowledge led him to pursue two doctorates in Economics – both from the Columbia University and London School of Economics.

He was the first Indian to pursue a doctorate in economics abroad. Dr. Ambedkar made his early career as an economist, professor and lawyer and was also appointed Principal, Government Law College, Bombay.

Dr. Ambedkar became active in Indian politics and social reform, soon after his return to India. He called upon the socially and economically disadvantaged to educate, agitate and organise. He also led Satyagraha and published periodicals like Mook Nayak, Bahishkrit Bharat and Equality Janta. His book Annihilation of Caste has strongly criticised the caste system then prevalent in India. He has also written scholarly books on economics, society and politics.

In 1936, Dr. Ambedkar founded the Independent Labour Party and contested elections in Bombay in 1937 for the Central Legislative Assembly. After independence, he was invited to serve as the first Law Minister of India. He was also appointed as the Chairman of the Constitution Drafting Committee, which was constituted to write India’s new constitution. In the drafting of the Constitution, Dr. Ambedkar was responsible for the inclusion of constitutional guarantees and protection of individual liberty, freedom of religion, civil liberties including universal franchise which were ahead of the times; and Dr. Ambedkar argued stridently for the rights of women. The Constitution, when finalised, was adopted on November 26, 1949 by the Constituent Assembly.

Dr. Ambedkar’s vision was of an India where the social system and economy would promote the full development of human potential and ensure a dignified existence for all citizens. For realisation of that, Dr. Ambedkar had played a crucial role in laying down the Directive Principles of State Policy, a unique feature of the Indian Constitution. The Principles mandate that the State shall strive to promote the welfare of the people by securing and protecting a just social order. These principles lay the foundation for social democracy envisaged by Dr. Ambedkar as a way of life that recognises the union or trinity of literacy, equality and fraternity.

Dr. Ambedkar established the Finance Commission of India in 1951 and contributed to the forming of important policies in Revenue, Finance and Land Reforms. He considered Article 32 of the Indian Constitution, the Right to Constitutional Remedies, to be the very soul of the Constitution and the heart of it. He believed that the greatest safeguard for purity and fairness in elections was to establish an independent Election Commission.

Similarly, he considered the Auditor General to be a key functionary who should have greater independence than even the judiciary. The Right to Information Act is, in fact, a modern day manifestation of Dr. Ambedkar’s commitment to building open, vibrant democratic institutions and strong constitutional methods.

Dr. Ambedkar was posthumously awarded India’s highest civilian honour, the Bharat Ratna in 1990. Every year, his birth anniversary is celebrated as a public holiday in India. People celebrate his birthday as Ambedkar Jayanti or Bhim Jayanti. The Maharashtra Government has acquired the modest building in London at 10 King Henry Road, where Dr. Ambedkar lived during his days as a student. It was inaugurated as a museum by Hon’ble Prime Minister Shri Narendra Modi in November 2015.

Dr. Ambedkar’s message from his address to the Constituent Assembly on November 25, 1949 is worth remembering:

“In addition to our old enemies in the form of castes and creeds, we are going to have many political parties with diverse and opposing political creeds. Will Indians place the country above their creed or will they place creed above country? I do not know. But this much is certain that if the parties place creed above country, our independence will be put in jeopardy a second time and probably be lost forever. This eventuality we must all resolutely guard against. We must be determined to defend our independence with the last drop of our blood.”

Indian President Ram Nath Kovind and Prime Minister Narendra Modi stressed on the need to imbibe his ideals in the conduct of each Indian.

“Tribute to Babasaheb Dr. Bhimrao Ambedkar, the chief architect of the Indian Constitution, on his birth anniversary. He waged a lifelong struggle to create an equitable society. Today, by taking a lesson from his life and thoughts, we take a resolution to adopt his principles in our conduct,” President tweeted in Hindi.

The Prime Minister said that Babasaheb’s struggle to bring the deprived section into the mainstream will remain an example for generations to come.

Bowing to the great Dr. Babasaheb Ambedkar on Ambedkar Jayanti, the Prime Minister tweeted, “His struggle to bring the deprived section into the mainstream will remain an example for generations to come”.