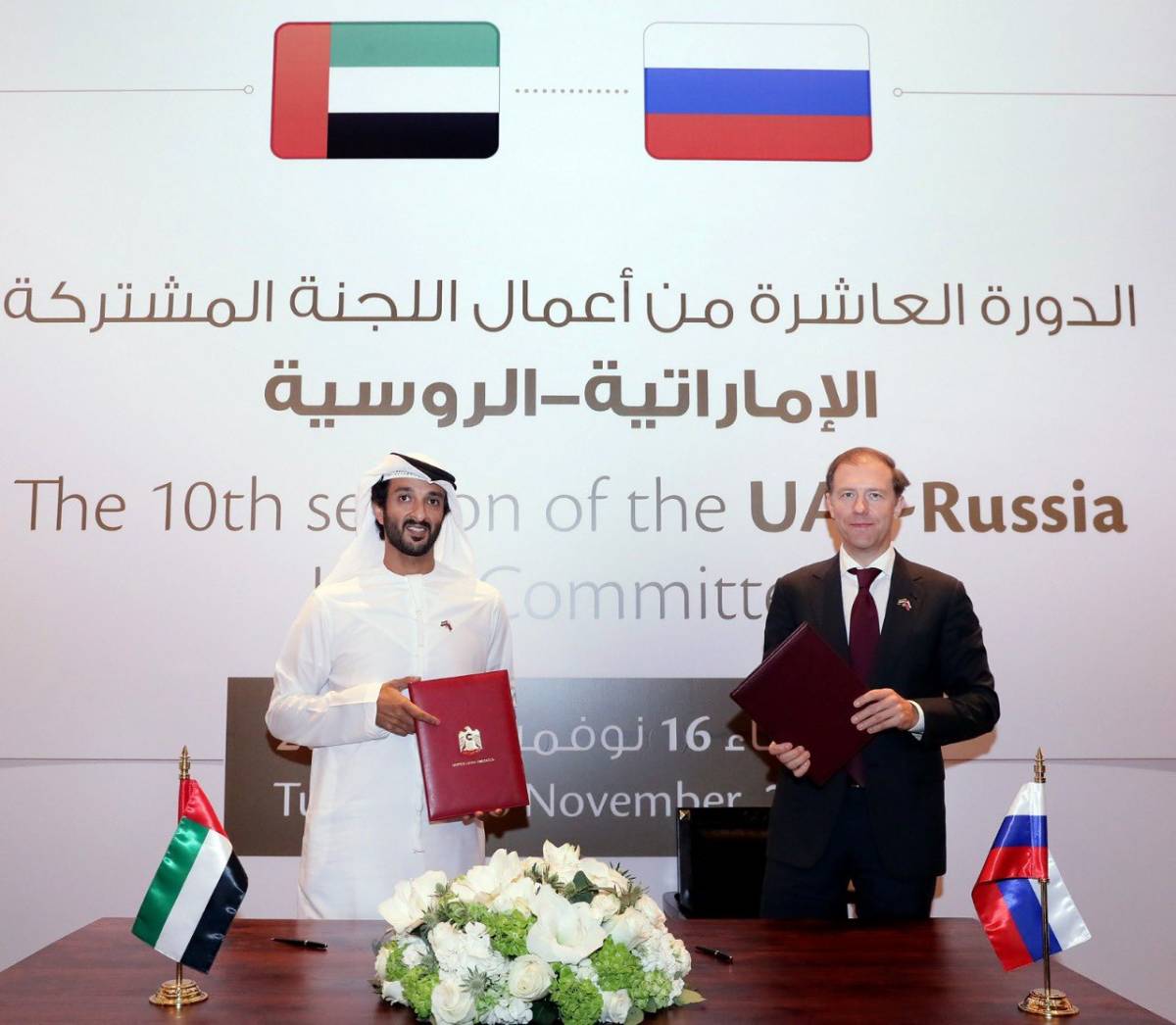 The 10th Session of the Intergovernmental Russia-Emirate Committee on Trade, Economic, and Technical Cooperation was held in Dubai, chaired by Abdullah bin Touq Al Marri, Minister of Economy; and Dr. Denis Manturov Russian Minister of Trade and Industry.

During the session, Bin Touq underlined the strength of the UAE-Russian relations, which represents a unique model of bilateral relations, and pointed out the two countries’ shared aspirations to develop existing partnership in a sustainable manner in line with their respective development visions and objectives. The minister further noted that the ties binding the UAE and Russia today have broad development potentials and promising prospects as they are based on solid historical foundations of mutual respect and common interests.

The ties binding the two friendly countries were consolidated over the last five decades, said Bin Touq, adding that they continue to flourish through strong strategic partnership that spans multiple areas of cooperation, development, and common interests, especially on the economic front.

Bin Touq added: “The economic relations between the UAE and Russia are witnessing progress in various fields, especially in new economic sectors such as 4IR, Artificial Intelligence, innovation, circular economy and various other vital fields. We will continue to intensify joint efforts with our partners in Russia to further strengthen cooperation and economic integration in accordance with a clear vision and new paths that serve the development aspirations of the two countries.”

During the session, both parties set a new framework for economic cooperation that includes 12 vital and future sectors and areas, in addition to outlining a roadmap for cooperation between the two countries in the next stage. It covers trade and investments, energy, industry and innovation, financial and banking services, customs, food security and agriculture, education and transportation, information and communication technology, media and culture, tourism and sports, environmental protection and natural resource management, circular economy, the Industry 4.0, and space.

Abdulla bin Touq briefed the Russian side on the latest trends and achievements the UAE economy has witnessed, elaborating on the initiatives launched by the UAE recently in line with its futuristic vision. He reviewed the ‘Projects of the Fifty’ and the UAE’s efforts to fast-track the transformation towards new economic model that is more sustainable and flexible by liberalizing investments, enabling 100% foreign ownership of companies, conclusively developing economic legislations to facilitate doing business, and fostering the UAE’s attractiveness for pioneering projects, prominent international companies and outstanding talents and innovations.

Furthermore, invited Russian corporations to leverage these economic developments in the UAE to explore more partnership and business opportunities in the country’s markets and expand into regional and global markets.

Meanwhile, Denis Manturov affirmed his country’s keenness to enhance collaboration with the UAE and build on the achievements made in recent years in terms of mutual economic relations, which has seen a tenfold growth since the year 1997 – the year in which the first Intergovernmental Committee session was held.

Al Zeyoudi noted that the economic cooperation between the UAE and Russia has reached new milestones in terms of volume and diversity in recent years, encompassing multiple vital sectors, such as renewable energy, space, modern technology and Industry 4.0, in addition to the successful projects and investments in the two countries’ companies in real estate, food security, infrastructure, petrochemicals, ports and aviation.

“The UAE markets are home to more than 4,000 Russian companies, which are considered major contributors to the growth of commercial ecosystem in UAE and the enhancement of opportunities and partnerships for both countries’ markets. We will move forward with joint efforts with our Russian partners to further strengthen the ties between our business communities and facilitate their access to promising opportunities in both countries’ markets,” Al Zeyoudi added.

DR. MOHAMMED AHMED AL JABER: “Next December marks the 50th anniversary of the establishment of bilateral relations between UAE and Russia. Our relations have always been friendly, stable, and built on the pillars of mutual respect and understanding. The dynamic nature of UAE-Russia Intergovernmental Committee is a testament to the significance of economic diplomacy’s role in shaping the UAE’s foreign policy, enhancing cooperation between the two countries, and promoting the relations in all areas. The Committee’s outputs present important collaborative programs in the sectors of the new economy that serve both countries’ futuristic visions and pave the way for a more sustainable and diversified development partnership between UAE and Russia.”

The UAE is Russia’s largest economic partner in GCC, accounting for 55 percent of the total trade between Russia and GCC region.

During the session, the two countries agreed on a plan to develop the volume of trade exchange, increase the contribution of the private sector in mutual trade and investment activities, enhance cooperation through the UAE-Russia Business Council, and expand the scope of communication to create new opportunities.

The two sides approved to take practical steps to support cooperation in the areas of the circular economy and the green economy, as well as to encourage the UAE business community to invest in Russia in various vital and future sectors, including industry, renewable energy, logistics, aerospace, automobiles, medicine, medical technology, transportation, agriculture, food, real estate, infrastructure, minerals and mining.