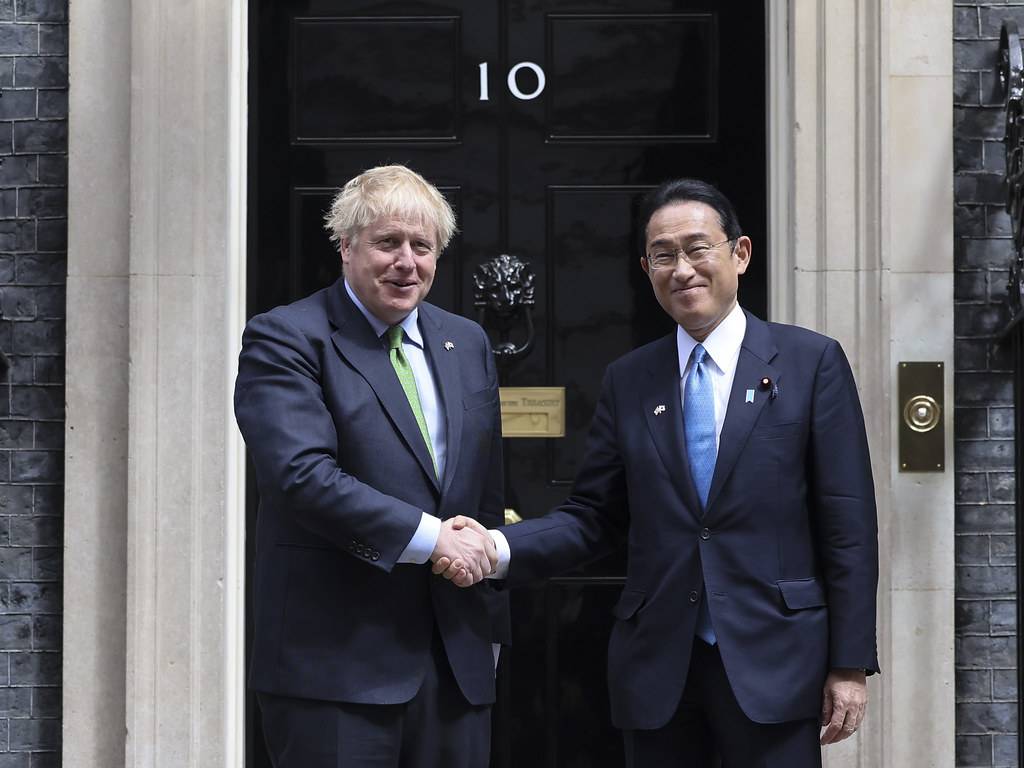 Deal makes Britain the first European country to have such an agreement with Japan..reports Asian Lite News

As part of its stated Indo-Pacific foreign policy tilt, the UK on Thursday confirmed an in principle defence and security agreement with Japan which would allow British and Japanese forces to exercise and operate together.

Prime Minister Boris Johnson hosted his Japanese counterpart Fumio Kishida at 10 Downing Street here as the Guest of the Government, during which the two leaders held bilateral talks and green lit the Reciprocal Access Agreement.

The UK said it is the first European country to have such an agreement with Japan.

As two great island democracies, and the third and fifth largest economies in the world, the UK and Japan are focussed on driving growth, creating highly skilled jobs and ensuring we remain technology superpowers, said Johnson.

The visit of Prime Minister Kishida will accelerate our close defence relationship and build on our trade partnership to boost major infrastructure projects across the country supporting our levelling up agenda, he said.

Kishida’s visit comes days after Johnson’s visit to India, during which defence and security cooperation with the Indo-Pacific region was in focus as well.

The Reciprocal Access Agreement with Japan has been dubbed as a boost for the UK’s commitment to the region and further safeguarding global peace and security.

The so-called landmark defence partnership, which will see the UK and Japanese Armed Forces deploy together to carry out training, joint exercises and disaster relief activities, will build on UK-Japan collaboration on defence and security technology, such as the Future Combat Air System (FCAS) programme, Downing Street said.

The Prime Minister [Johnson] praised the new in principle Reciprocal Access Agreement, an idea that was first raised between the leaders when they were foreign ministers, and said it was yet another symbol of the deepening relationship between the UK and Japan, said a Downing Street spokesperson, in a readout of the bilateral discussions.

Both leaders agreed that Russia’s barbaric invasion marked the end of the post-Cold War period and had major implications for wider international stability.

Security in the Euro-Atlantic and Indo-Pacific regions was indivisible, they agreed, and the G7 leaders said democracies around the world needed to stand in unity against authoritarian regimes, the spokesperson said.

It was also confirmed that Britain would soon lift remaining restrictions on Fukushima food products as both leaders enjoyed popcorn from the region during their meeting. The curbs were imposed following the nuclear accident in the Japanese city over a decade ago.

China has territorial disputes with many countries in the strategic Indo-Pacific region.

The Chinese government claims nearly all of the disputed South China Sea, though Taiwan, the Philippines, Brunei, Malaysia and Vietnam all claim parts of it.

Beijing has built artificial islands and military installations in the South China Sea. Beijing is also involved in a maritime dispute with Japan over the East China Sea.