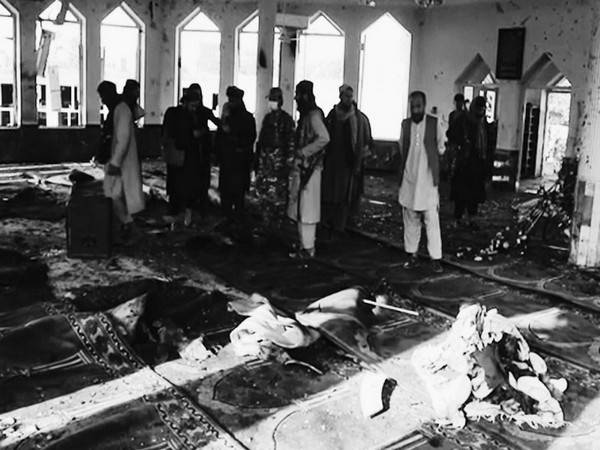 The union stated that every act of terrorism is condemned as there is no discrimination between Shia and Sunni or other religions in view of Islam….’reports Asian Lite News

A global union of Muslim scholars has condemned the mosque blast in Afghanistan’s Kunduz province that claimed the lives of at least around 100 people, Ariana News reported.

In a statement, the International Union of Muslim Scholars (IUMS) said it “strongly condemns the bombing of a mosque in Kunduz province, which killed and wounded dozens of people.”

On Friday, the deadly blast ripped through Sayed Abad Mosque in Kunduz as local residents attended the mosque for Friday prayer. More than 100 people were killed in the attack while several were injured.

The union stated that every act of terrorism is condemned as there is no discrimination between Shia and Sunni or other religions in view of Islam.

Secretary-General of the union, Ali al-Qaradaghi, called the attack a criminal act. He stressed that any attack against places of worship and the killing of people is a crime that goes against the teachings of Islam and other religions, Ariana News reported.

Islamic State Khorasan had claimed responsibility for the attack on the Shia mosque. It was the group’s deadliest strike since the suicide bombing at the international airport in Kabul on August 26 that killed about 170 civilians and 13 US troops, according to The New York Times. (ANI)