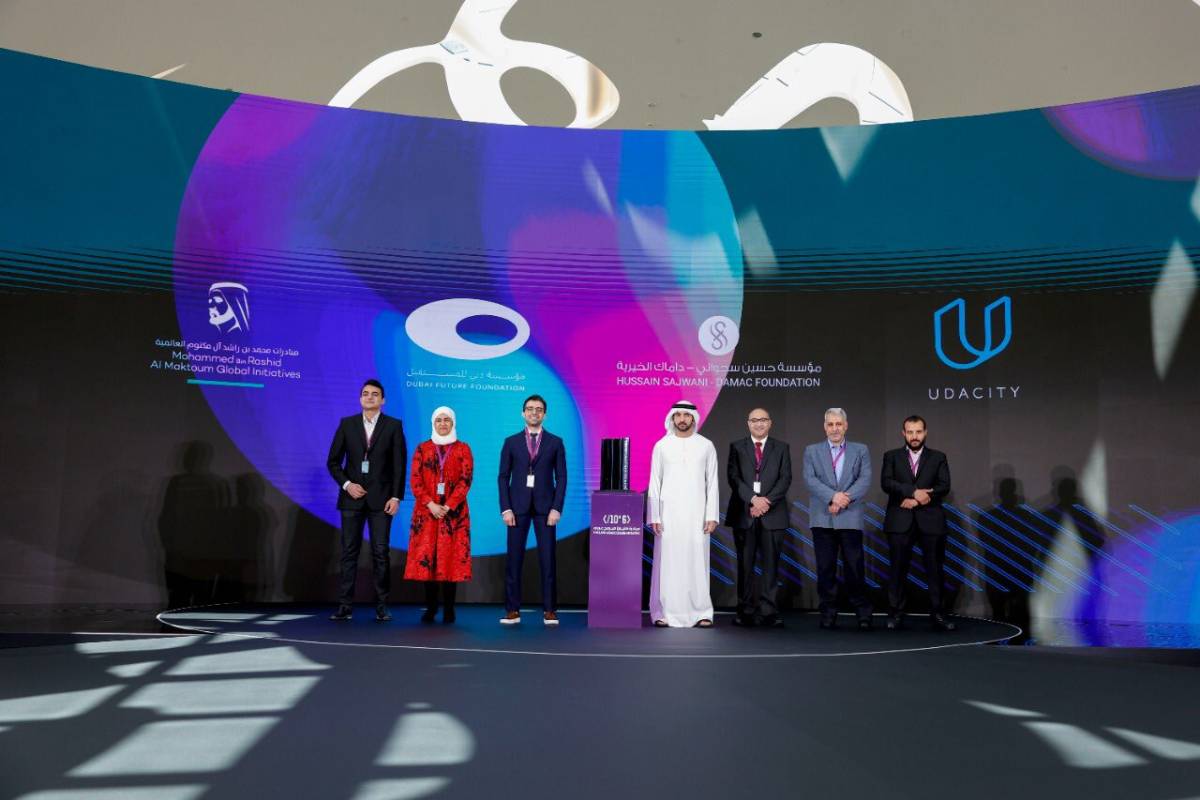 H.H. Sheikh Hamdan bin Mohammed bin Rashid Al Maktoum, Crown Prince of Dubai, Chairman of The Executive Council of Dubai and Chairman of the Board of Trustees of the Dubai Future Foundation, today honoured the winners of the ‘One Million Arab Coders’ challenge, which featured a total prizemoney of $1,350,000.

The winners were honoured at the closing ceremony of the challenge held at the Museum of the Future.

“Truly deserving of the one-million-dollar prize for his project, the ‘Habit 360 application’, Shahoud is a true representation of an Arab innovator. We also congratulate all the winners and participants in the ‘One Million Arab Coders’ initiative, who have successfully employed the language of the future in developing pioneering projects that will contribute to achieving a qualitative leap in their societies.”

He added, “The ‘One Million Arab Coders’ initiative provided the opportunity for one million Arabs to enter the digital world. It fulfilled the dreams of tens of thousands of Arab programmers from all over the world. Its outcomes and successes will be the basis for many upcoming Arab achievements in the world of technology and coding.”

He further said, “One Million Arab Coders’ has paved the way for Arab youth to broaden their horizons and sparked their innovation and creativity in the field of advanced technology.”

Hamdan bin Mohammed went on to say that the ‘One Million Arab Coders’ initiative, which was launched in 2017 by His Highness Sheikh Mohammed bin Rashid Al Maktoum, Vice President, Prime Minister and Ruler of Dubai, has succeeded in becoming a gateway for many Arab youth to use their programming skills to realise their dreams and aspirations.

He said, “We look forward to our Arab coders continuing their pioneering innovations and expanding their achievements. We expect their names and future accomplishments to light up the sky worldwide.”

“His Highness Sheikh Mohammed bin Rashid Al Maktoum’s vision for the region’s future is based on investing in the development of the Arab people. The language of programming is one of the pillars of the knowledge economy and a major bridge to a future in which those who possess scientific excellence will have the upper hand,” Sheikh Hamdan concluded.

The winner, Mahmoud Shahoud, is a software engineer from Syria who developed the ‘Habit 360 application’ that helps people build new habits, track their progress and stay motivated. The application has served more than 200,000 users from around the world.

The top five entrepreneurs in the ‘One Million Arab Coders’ challenge also received prizes of $50,000 each. The winners included Egyptian programmer Muhammad Al-Iskandarani for developing of the ‘Muaahal program’, a simplified educational application to qualify individuals in all fields and make it easier for companies to hire talented people; and Egyptian Programmer Iman Wagdy for developing the ‘3lfraza app’, which delivers fresh food prepared by women at home.

Ammar Salem, an Iraqi university professor from the University of Baghdad’s College of Architecture, joined the list of distinguished coders by developing the ‘Qeraaty Alnateqa’ programme, a project that aims to design a new sign language using a programme to convert those signs into letters and spoken words. Meanwhile, Egyptian Andrew Makram developed the ‘Najeb’ programme to facilitate and unify the process of submitting and marking exams. As for Engineer Hassan Mohamed, from Egypt, he developed a chat translation programme that allows users to talk to each other in their respective native languages and translates the conversation instantly. It is available in more than 36 languages.

During the ceremony, the four best trainers in ‘One Million Arab Coders’ were honoured with a prize of $25,000 each, for their exceptional efforts in empowering the participants with knowledge and expertise and helping them bring their projects to life. The winning coaches were Abdelmoumen Boumalia from Algeria, Rasha Bahbouh from Syria, and Mustafa Abdel Fattah and Abu Bakr Farouk, both from Egypt.

Software expertise His Highness Sheikh Mohammed launched the ‘One Million Arab Coders’ challenge in July 2021 with the aim of recognising and honouring the achievements of Arab talents in the field of programming and creating an opportunity for participants in the initiative to showcase their innovative projects, developed using programming skills and the experience gained during their participation.

The challenge saw a total of 257 projects submitted by the initiative’s graduates from 50 different countries in various sectors related to programming, technology and entrepreneurship in the areas of website and mobile application development. In order to qualify for the final stage and compete for the million-dollar prize, the nominees were selected according to a set of main criteria, including the project idea, the innovation quality, and ease of use.

Supervised by the Dubai Future Foundation, the ‘One Million Arab Coders’ initiative has seen 1,058,265 people from around the world participate virtually in millions of hours of study and work, as well as tens of thousands of training workshops. Since its launch, 1,500 “Nano Degree” certificates have been awarded to distinguished participants and promising talents. The initiative featured more than 3,600 certified trainers from around the world.

Serving Humanity and the Future of Societies Led by the Dubai Future Foundation (DFF) and organised under the umbrella of the Mohammed Bin Rashid Al Maktoum Global Initiatives (MBRGI), ‘One Million Arab Coders’ is the largest initiative of its kind in the world. The initiative aims to teach one million young people from the Arab world to code and enable them to launch exceptional projects and programmes that serve Arab societies, drawing on the science and skills gained from their training.

The initiative embodies His Highness Sheikh Mohammed’s vision to empower Arab youth with the tools of the future to serve humanity and build a brighter future for the region. The challenge forms part of the UAE’s continuous efforts make a positive impact on the world.

Partnerships for Building Capacities The ‘One Million Arab Coders’ initiative is supported by the Hussain Sajwani– DAMAC Foundation, which focuses on supporting learning opportunities and developing skills to stimulate profitable social and economic participation, and empowering societies in the Arab world to achieve a sustainable future. The Udacity digital learning platform also supported the initiative by offering educational content and training in necessary skills for future jobs. The list of partners of the initiative also included many international technology companies, including Microsoft, Facebook, Oracle, Careem and others.

The initiative also provides the world with a pioneering model for promoting the development of programming skills. It was adopted in the Hashemite Kingdom of Jordan, which launched the ‘One Million Jordanian Coders’ initiative in May 2019.

The initiative was introduced with the aim of making Jordan a world leader in the field of programming. The ‘One Million Uzbek Coders’ initiative, launched through a partnership between the governments of the UAE and the Republic of Uzbekistan, was announced in November 2019, with the aim of providing Uzbek youth with an opportunity to acquire skills in programming, artificial intelligence and emerging technologies, to contribute to the development of innovative technology-based solutions and services.