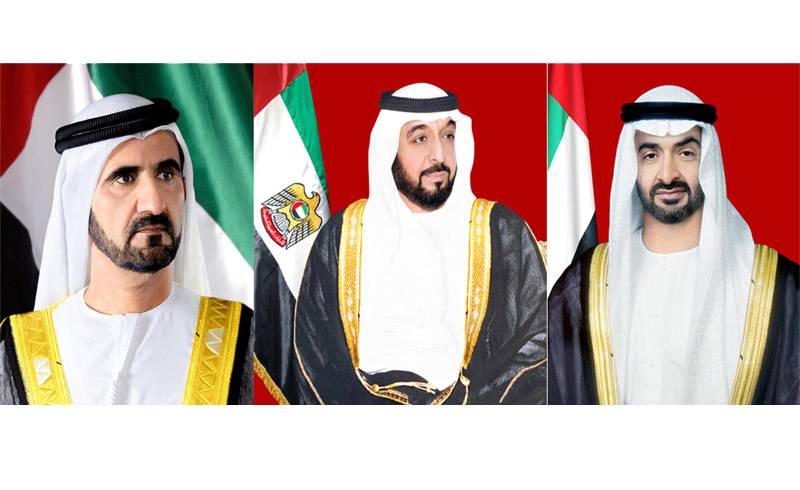 President His Highness Sheikh Khalifa bin Zayed Al Nahyan, has sent his greetings to the kings, Emirs and presidents of Arab and Islamic states on the occasion of Eid Al Fitr.

His Highness Sheikh Khalifa wished them and their peoples continued progress, prosperity and stability.

Moreover, Sheikh Mohamed received a telephone call from the Prime Minister of Israel, Naftali Bennett, who congratulated him on the occasion. Sheikh Mohamed thanked Bennett for the thoughtful gesture, and wished betterment and peace for all world nations.

During the telephone calls, Sheikh Mohamed conveyed the greetings of President His Highness Sheikh Khalifa bin Zayed Al Nahyan to his fellow leaders and his wishes of further wellbeing, prosperity and development to their countries.

For their part, the leaders reciprocated the greetings and wished more progress, safety and security to the UAE people under the wise leadership of His Highness Sheikh Khalifa bin Zayed Al Nahyan. They also wished more prosperity and development to the Arab and Islamic nations, and all other countries.

Performing prayers by His Highness Sheikh Mohamed’s side were a number of Sheikhs, senior officials, dignitaries, citizens and residents.

Dr. Mohammed Matar Al Kaabi, Chairman of the General Authority of Islamic Affairs and Endowments, delivered the sermon, during which he spoke about the significance of the occasion and the noble values it holds. He also pointed out that Eid is an occasion to strengthen communication with family, creating love and affection between relatives.

He wished President His Highness Sheikh Khalifa bin Zayed Al Nahyan good health and further progress and pride to the UAE and its people.

To bring happiness and joy on the occasion of Eid Al-Fitr children, His Highness Sheikh Mohamed bin Zayed Al Nahyan has ordered the disbursement of eidiyah – the tradition of giving cash to children during Eid – to children of beneficiary families social assistance provided by the Ministry of Community Development and those registered with local governments across all emirates.

Only children under 18 years will benefit from His Highness Sheikh Mohamed’s kind grant which shows his keenness to paint smile on faces of children and share joy with them and their families on the spectacular Eid occasion.

Herzog expressed hope for “peace and stability in the region” on the eve of Eid al-Fitr, said a statement issued by Herzog’s office, without elaborating on the content of the conversation.

Herzog’s office noted that the President is expected to speak with more leaders in the next few days.

It was the first official talk between Herzog and Abbas since the beginning of a wave of fatal violence between Israel and the Palestinians in March.

The UAE and Bahrain agreed to normalise their ties with Israel in the US-brokered Abraham Accords which were signed in September 2020.

The Israeli Presidency is a largely ceremonial position.